Calling a Spade, a Spade

If you have read our book you will know how we feel about spade (unsupported) rudders. We don’t like them and consider them a pretty bad idea for a voyaging boat. For those that haven’t read the book, a properly supported rudder is an essential facet of a voyaging boat. A spade rudder simply hangs down from the hull on a stainless steel shaft. This make them fantastically vulnerable to damage from collision with sea debris (floating logs, half submerged containers, dozing mermaids, etc.) and we go to great pains in our book to discourage all potential sea gypsies from buying this type of boat. (See picture). 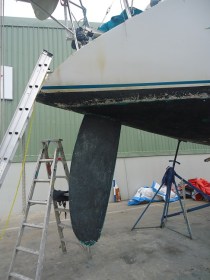 Something we did not go into (and probably will in the next edition) is the added risk of “work hardening” on spade rudder shafts. We have all experienced work hardening in other areas of our lives. This is the process that allows us to break certain materials by repeated bending. Take a paper clip and straighten it out. Now bend it backwards and forwards. Pretty soon the paper clip will break at the point where you have been bending it. This is not because it has got softer, but because the point where all the “work” was being done actually got harder, and therefore more brittle and no longer able to bend as efficiently.

As is often the case in so many areas of life – that which cannot bend, breaks.

All rudders have to absorb large forces from the sea. That is a given. The problem the spade rudder has (being unsupported at the bottom) is that each time a wave rolls across it, the shaft flexes from one side to the other – just like the paper clip in the experiment – with the point doing the most work being where the shaft of the rudder exits the hull. Can you guess what happens?

You got it – work hardening at that point. Then failure.  (The much higher forces on the shaft of a spade rudder often exacerbate  any crevice or anodic corrosion that may pre-exist and often lead to a false diagnosis. Any type of rudder post can suffer crevice or anodic corrosion, but it is principally spade rudder posts that fail catastrophically as the added forces and lack of safety margin in construction tend to expose other faults more dramatically).

Funnily enough, I was just explaining this very process to a potential sea gypsy who contacted us after reading our book, when we heard that a boat had been towed into the local yard with rudder problems (we are currently in Fiji).

Being fantastically nosey about this kind of thing, I dashed over (all of 500 meters) to find out what had happened. I think the pictures tell the story (see below). 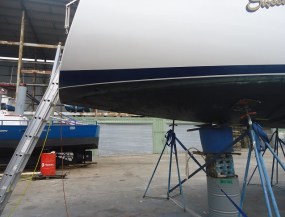 As you can see in the first picture, the rudder has gone. The whole thing is now resting in the silt 5 kilometres under the surface of the Pacific Ocean and will cost several thousand dollars to replace.

The shaft has sheared off

In the next picture, you can see that the shaft has snapped at precisely the place the principal of work hardening would predict.

This poor sailor is also facing a bill of $7000 for the tow into Fiji, and a couple of thousand for the boatyard. Had he been further offshore, the tow could have cost several times that. If he had been offshore in bad weather, the cost may not have been calculable in dollars.

Spade rudders are cheap to produce and fit. Manufacturers tell us that they are also a good idea and produce all kinds of spurious figures and twisted logic to convince us that what they want to sell us is what we want to buy.

Regardless of what the salesmen and racing crowd say, there is no possible way a spade rudder is stronger than a supported rudder. The numbers simply don’t add up any better than the numbers for building a house without foundations. Find me a qualified engineer that will say any different in writing and I will show you someone who is working for the yachting industry.

But while uninformed sailors continue to buy spade-ruddered boats for their marble counter tops and en-suite bathrooms, this is what the manufacturers will continue to produce.   And who can blame them? They have to sell boats in a very competitive environment and new sailors don’t give a hoot about the rudder.

It is up to us to demand sea-worthiness in yacht design by rejecting unsound practices – no matter how nice the cockpit cushions are or how large the aft cabin is.

Rejecting spade rudders is a good place to start.

PS Has anyone else got any spade rudder horror stories? We would like  to hear them -especially if you have photos.

This entry was posted in Uncategorized and tagged boatyard, Fiji, Getting the Right Boat, tips. Bookmark the permalink.

15 Responses to Calling a Spade, a Spade