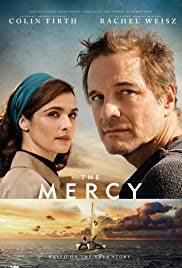 Fifty years and gallons of ink have passed since the first Golden Globe Single Handed Around the World Race and to coincide with this anniversary, Hollywood is releasing a film about one of the competitors and a personal hero of mine – the little known and often overlooked sailor Donald Crowhurst.  The film is not on release yet, so it is not possible to predict how the LA movie industry will portray this often maligned sailor, so before they get their say, I would like mine.

I have never been much of a hero worshiper.  I remember watching Superman as a kid and being singularly unimpressed – what courage does it take to stand up to a bullet if you know it is going to bounce harmlessly off your oversized red pants?  What courage is required to leap between buildings if you know that you can just fly off into the sunset if you cock it up?  I feel a similar ambivalence towards the sailing supermen.  The Moitessiers and Knox-Johnsons of the world seem to have been blessed with superpowers and a mental robustness that are not granted to the rest of us.  There is no doubt that they are great adventurers and sailors, but I have always been more interested in what the ordinary guy like myself can do – not what is achievable by the physically and mentally gifted.

One’s relationship with supermen is always doomed to a, ‘well it’s OK for you’ type of passivity, but when you meet somebody ordinary who is living an extraordinary life, your thoughts are likely to be more inspirational.

‘Well if they can do it’ we think to ourselves, ‘why not me?’

Yes, I have lead and continue to lead, an adventurous life but those people that have inspired me were not supermen, but ordinary, human, fallible beings. Of course, when one is surfing the edges of what is achievable by ordinary men and women, there is a danger that we may drift into the arena of the over-confident and overestimate our own abilities or (perhaps less forgivably) underestimate the dangers that face us. We may bite off more than we can chew.

We are amply assisted in this process by the ‘just do it’ mentality of the advertising world and the ‘you go girl’ attitude of the philosophically challenged who seem to dwell in increasingly regrettable numbers on social media.  With growing  predictability, nearly every sailing blog carries this quote from Mark Twain.

“Twenty years from now you will be more disappointed by the things that you didn’t do than by the ones you did do. So throw off the bowlines. Sail away from the safe harbour. Catch the trade winds in your sails. Explore. Dream. Discover.”

Apart from being an extraordinarily long winded and prescient way of repeating the rather banal Nike mantra, the implication of course is that you will regret inaction more than action and (by extension) that whatever you do you won’t regret.

This is singularly untrue on an ocean that is largely indifferent to your plans for self-actualisation.  There are thousands of people who have put to sea without experience on unsuitable boats who deeply regret it.  Many carry the heavy burden of guilt and sorrow for the lost lives of loved ones and crew, even more have been bankrupted or traumatised by the experience. Innumerable relationships have been destroyed. 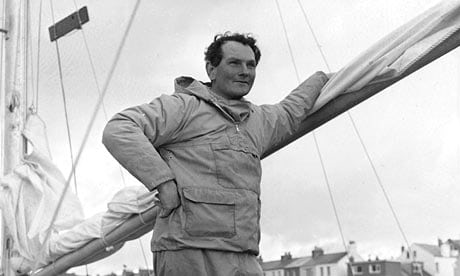 Sometimes then, the world needs a different type of hero – one that shows our fallibility, not adds to our over-confidence. Donald Crowhurst was such a man – unassuming, quiet and utterly ordinary. One of the entrants in the original Golden Globe Single Handed Around the world Race in 1968, the inexperienced Crowhurst set off on a wholly inappropriate, untested boat and paid the ultimate price.

As the entrants prepared for the race, legendary sailor Bernard Moitessier (a genuine superman if there ever was one) commented that,

“Anyone who attempts this for any other reason than the joy of it, will get his neck broken.”

And he was right.  Donald Crowhurst, a weekend sailor at best, was no lover of the sea. He wanted to be special. He wanted the same type of accolades that had so recently been bestowed upon Sir Francis Chichester, he wanted to make a name for himself and to promote his fledgling electronic navigation company.  He was certainly not inspired by the pure joy of being ‘out there’. When it became obvious that all his hi-tech gizmos were not going to be any substitute for a strong boat and the increasingly undervalued asset of hard-won experience, rather than give up (and face bankruptcy) he decided to cheat by hanging out in the South Atlantic and waiting several months for the fleet to sail around the world, whereupon he would quietly slip in behind the tail-end charlie and return to the UK. Perhaps not to a hero’s welcome, but a respectable showing nevertheless.

But the fragile and fallible human mind had other ideas. Trapped in the South Atlantic for endless months of solitude and guilt, he eventually killed himself rather than face possible exposure.

Crowhurst reminded us that there are caveats to the idea that ‘anyone can sail around the world’.  He reminded us just how lonesome it is out there and how quickly things can go south – particularly hi-tech electronics that tend to fail at the earliest exposure to salt water.  Crowhurst believed the secret of his success would be untested technology and this philosophy was exposed in the most tragic way. 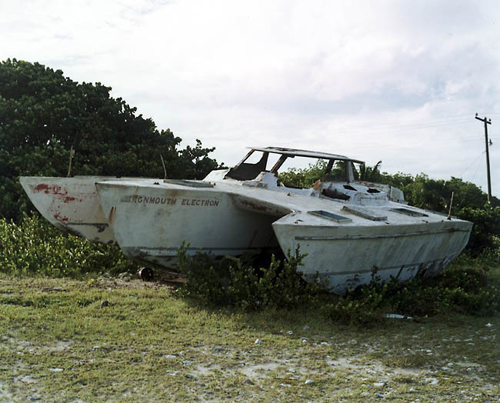 Donald’s trimaran ‘Teignmouth Electron’ was found adrift in the Atlantic Ocean in 1969 / from the series Disappearance at Sea, 1999, by Tacita Dean

The death of Donald Crowhurst raised the game of those who came later – reminding thousands of sailors of the value of a sturdy, tested design and of experience gained the hard way, rather than imbibed second hand or bought at the boat show. The death of  Donald Crowhurst scared many people into doing the right thing. It is hard to estimate how many lives he saved this way. Donald Crowhurst was a brave, often maligned, example of the fragility of human nature and the vastness of the sea.  It was a message that needed to be heard, and still needs to be heard today.

In the fifty years since, Crowhurst’s lesson seems to have been increasingly drowned out by the consumerism that has taken over the marine world.  It makes good marketing sense to portray sailing around the world as simple – as long as you have the huge amounts of electronic gadgets that the salesmen are all too happy to charge to your card. And once again, people with little experience are hitting the sea with unsuitable, lightly-built boats bristling with electronic gizmos as a surrogate to seaworthiness. With increasing regularity, inappropriate boats are failing or grounding on reefs or sinking due to a combination of lack of good sea keeping and over reliance on electronic toys (see my article in the November 2017 issue of Cruising Helmsman for more detail. You can download this here)

Perhaps the most worrisome group are the ‘Bucket Listers’.  Increasingly, rich retirees with little sailing experience set off ‘around the world’ in the belief that this will give their life a meaning that it previously lacked.  That may seem like a good idea to you, but remember what Moitessier said.  The sea is completely oblivious to you and your needs.  It does not care that you feel that your life lacks meaning. Imposing your agenda on the sea is exactly the kind of hubris that got Crowhurst killed.

While I believe that we are all capable of more than we think we are, Donald Crowhurst will always remain my sailing hero because he reminds us that there are limits.  This was an important message fifty years ago and a particularly important message now in the age of Facebook where encouraging caution and preparation is too often portrayed as ‘pissing on somebody else’s dreams’.

Donald Crowhurst lost his life showing the rest of us where the line between dreams and fantasies is and his example has injected a bit of well needed reality into an increasingly sloganized narrative that was beginning to make ‘exploring the trade winds’ sound too much like an easily purchased panacea to all modern ills. 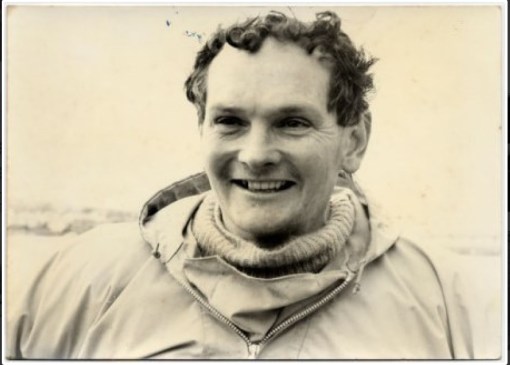 *The film The Mercy stars Colin Firth as Donald Crowhurst and goes on general release Feb 2018.

A Voyage for Madmen by Peter Nichols

Deep Water by Louise Ormond.  An excellent documentary with much original footage.  Notoriously publicity shy, the director has managed to involve the  Crowhurst family in the narrative which gives her portrayal a sympathy that is often lacking in other accounts.

This entry was posted in Uncategorized and tagged books. Bookmark the permalink.
← Never too old
The Boatyard Vava’u, Tonga →